The day started with a traditional river loop minus Mosman hill. There was a great turnout at Coode street. 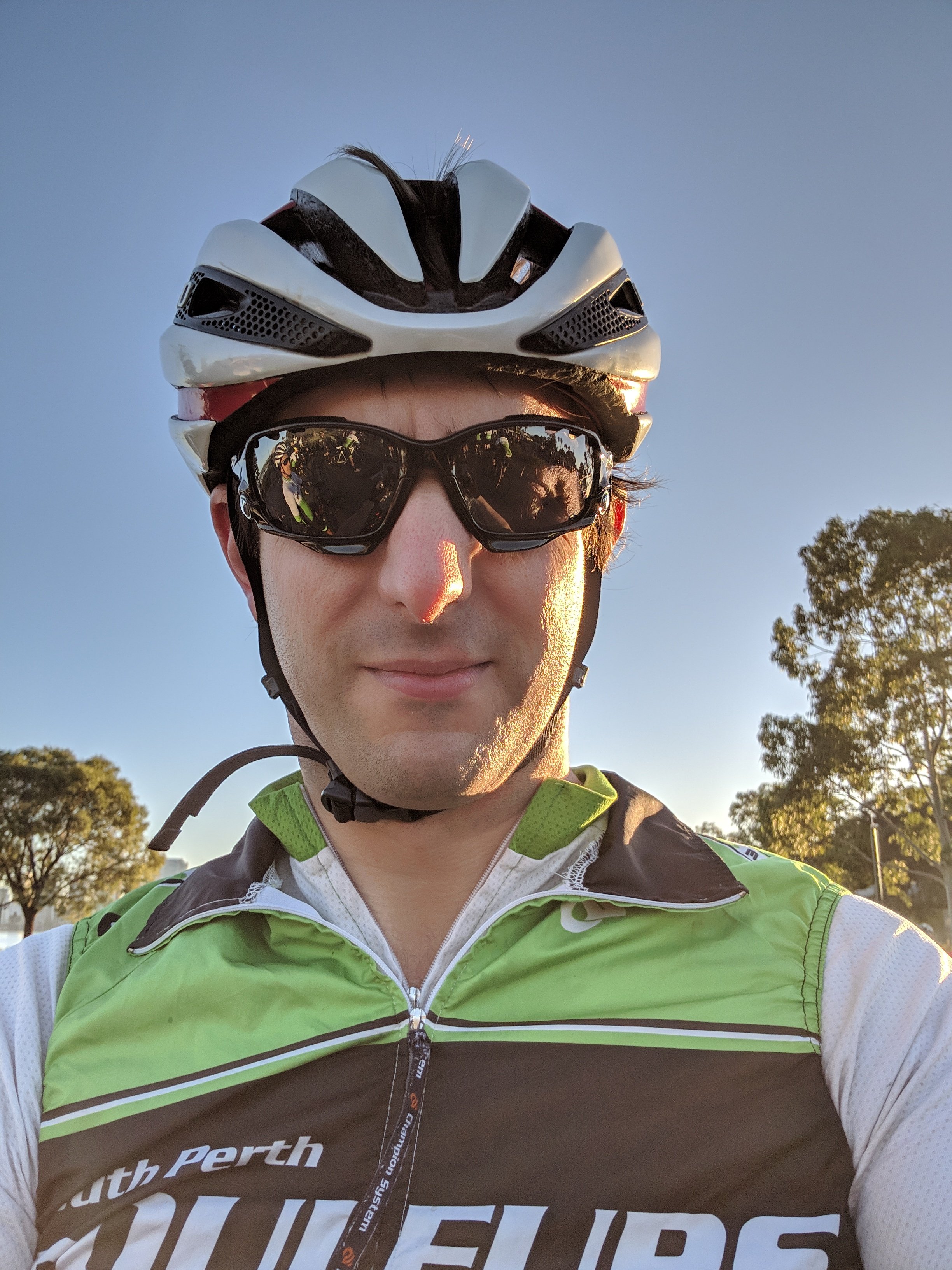 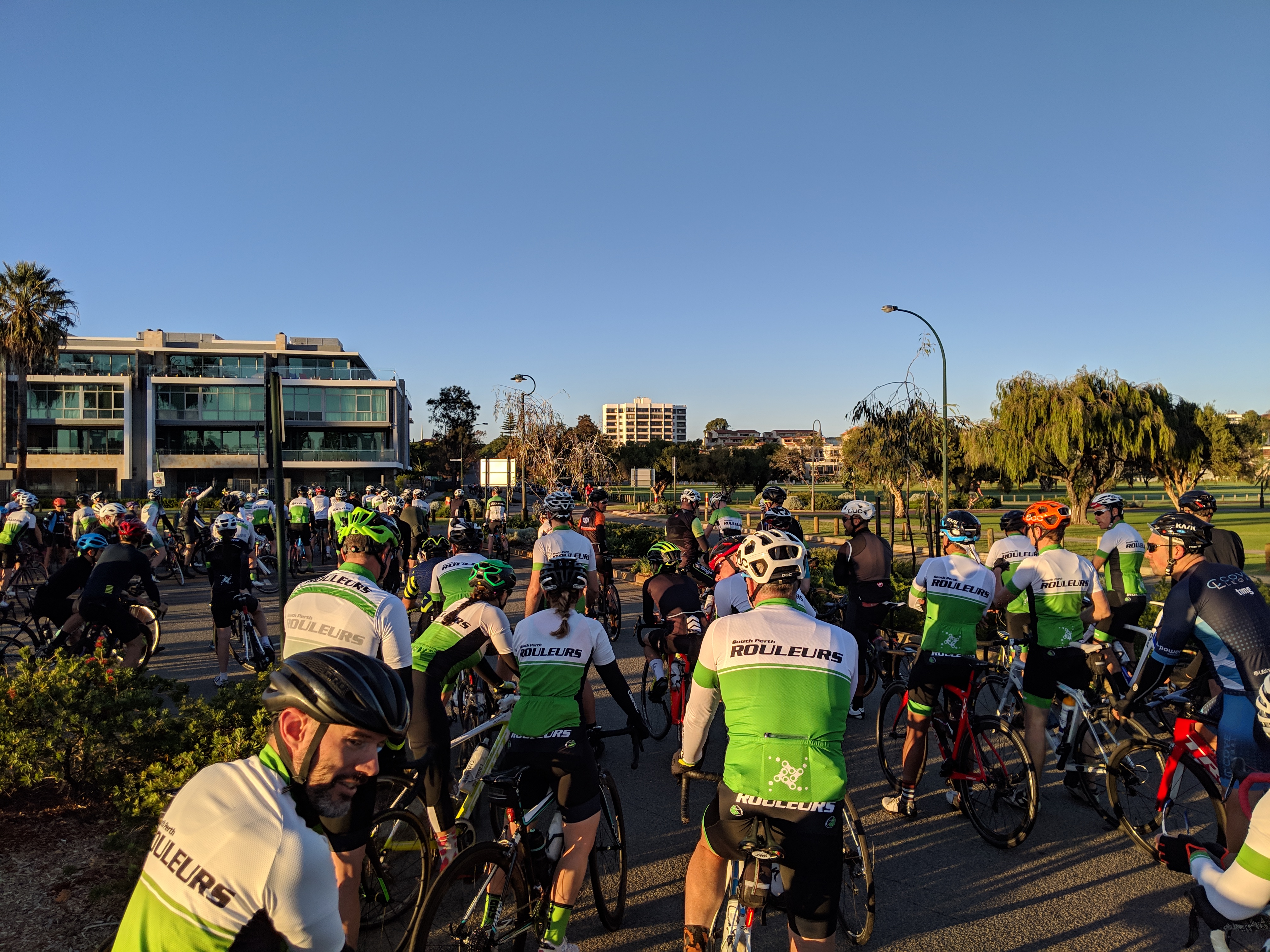 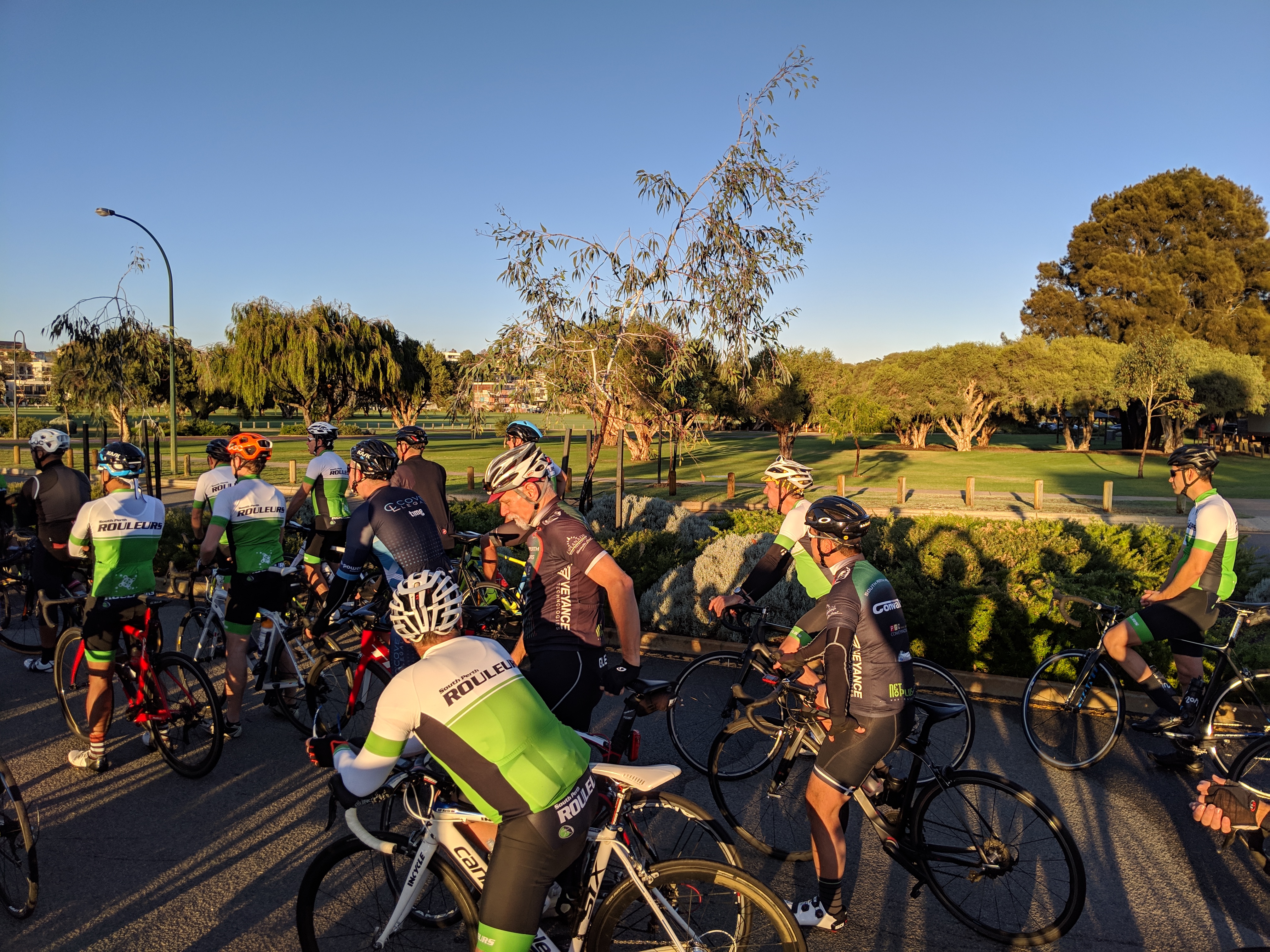 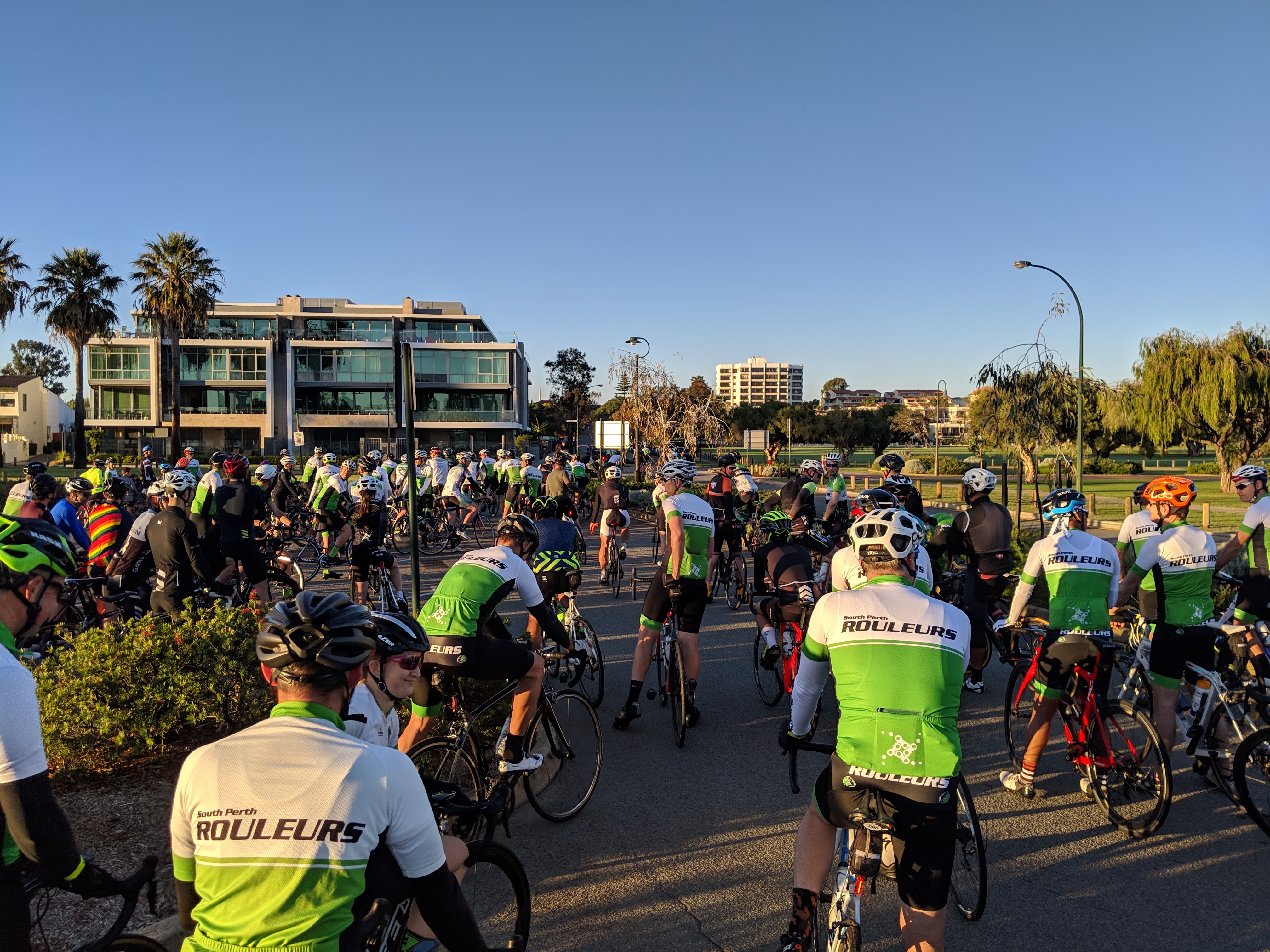 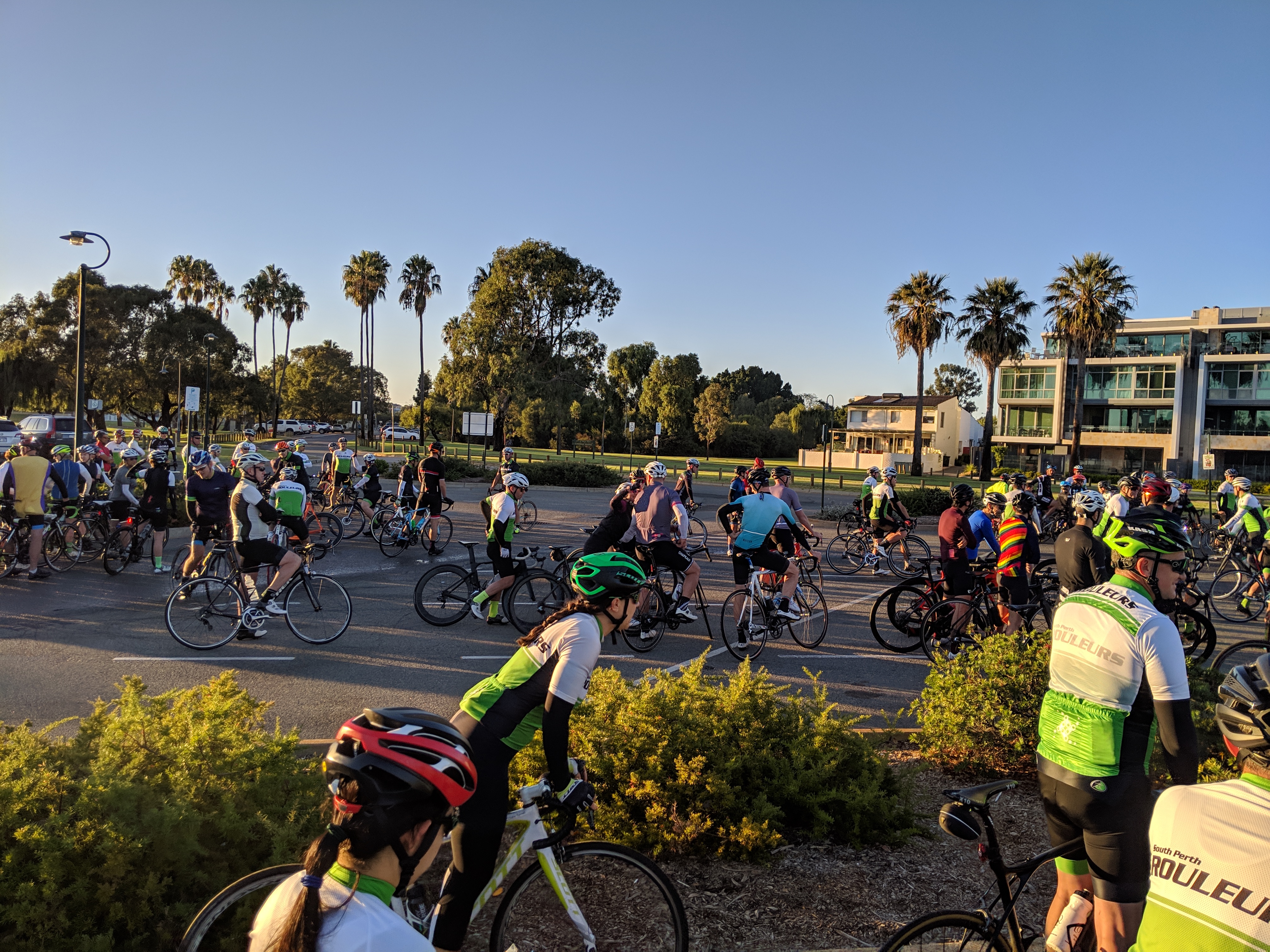 Rob Ramsden introduced a lot of us to his off bike talents. Would have never known without attending last night. He was entertaining.

After more that enough beer was consumed at the Windsor Rhian and I headed back across the river for dinner in Northbridge. Was a great baby free night. 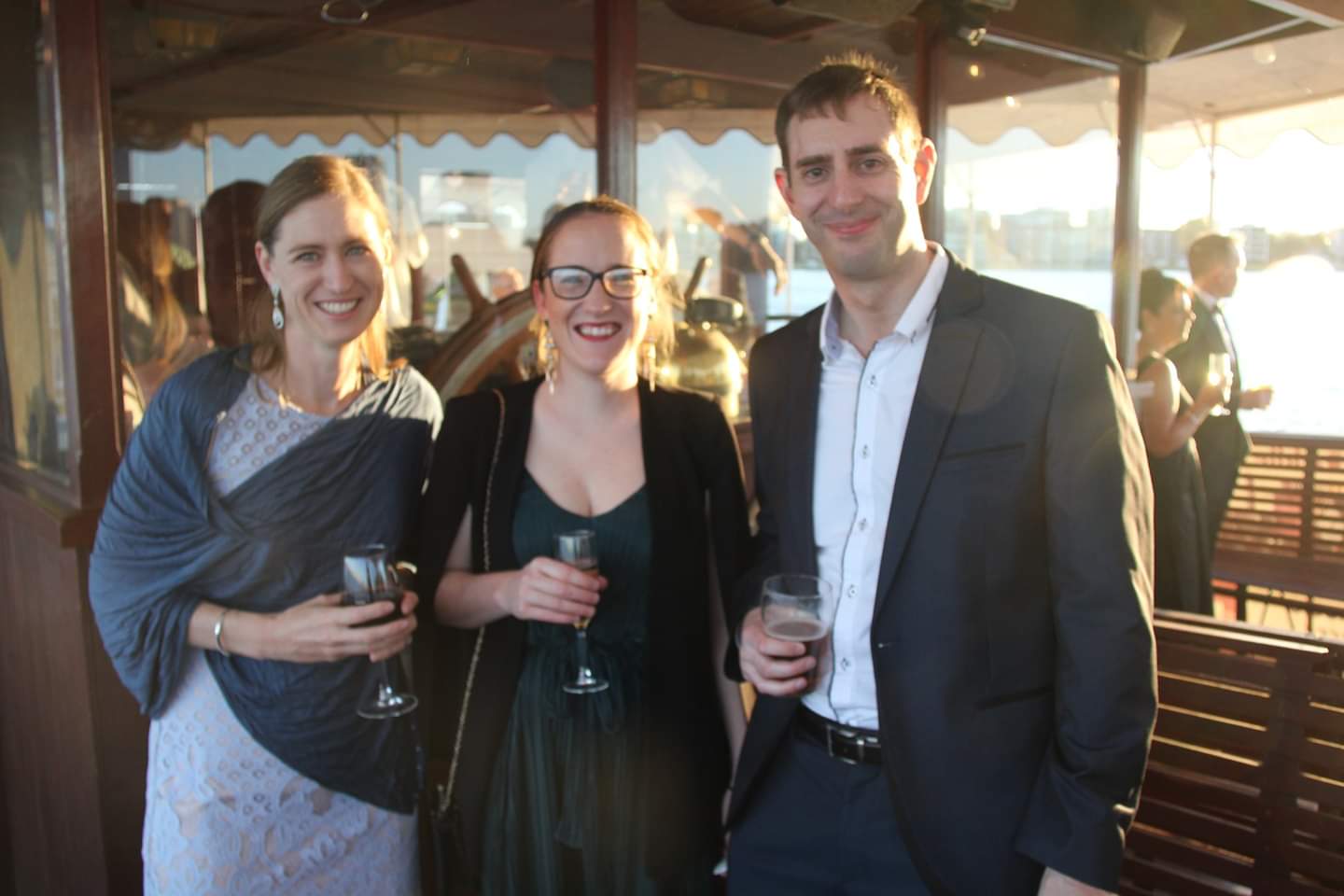 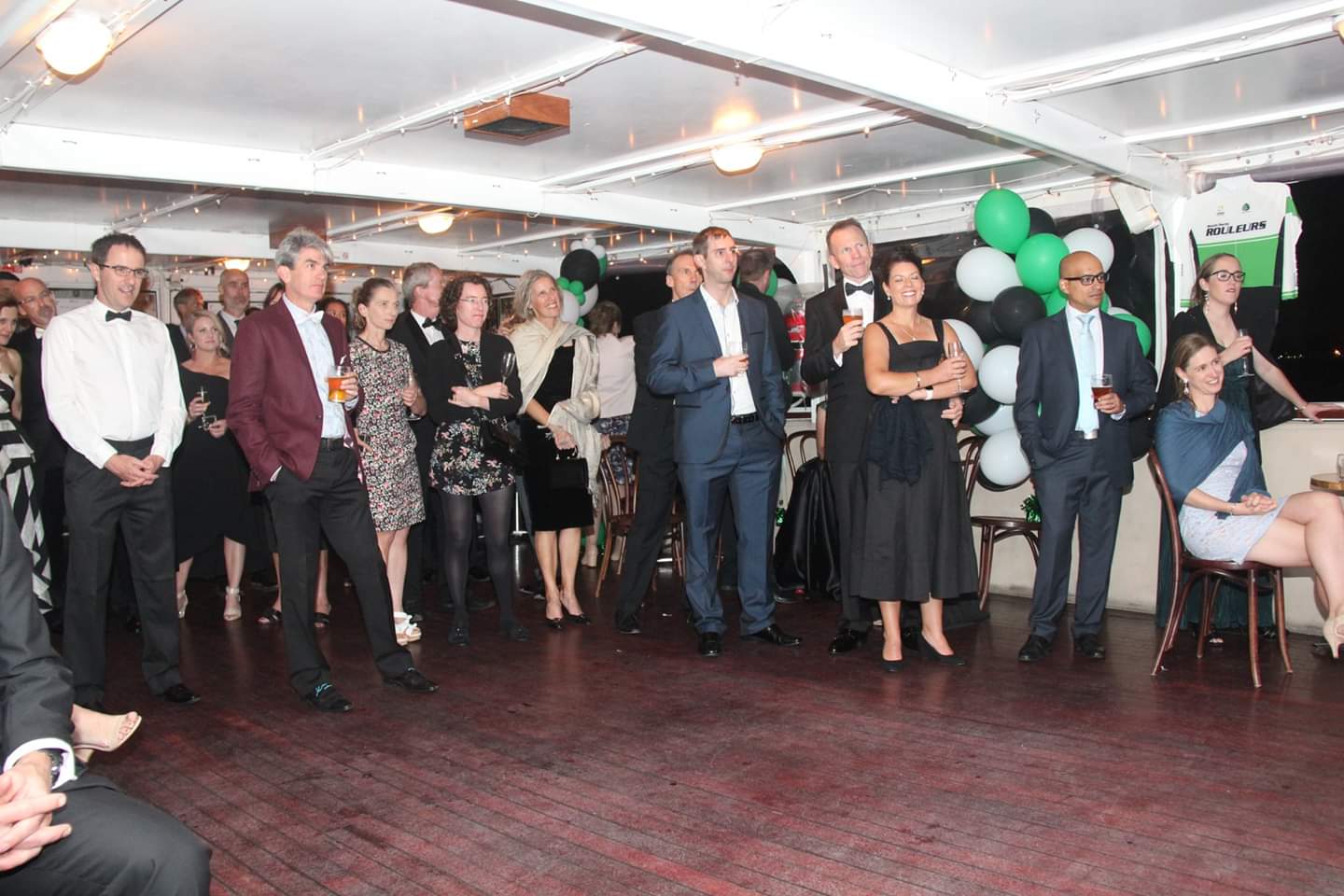 I have done my best to make the most of this weekend. Friday I came home from work and didn’t have any plans to be doing anything. The wise move would have been have a quite night because of big plans for Saturday night. Well this was out the window because I had new clothes and I wanted to wear them. After about an hour of back and forth it was decided I would head over to Jo & Fi’s and we would go to a pub call My Place. The lure of cheap cocktails was an easy selling point for these two.

Was a good night out and much better than sitting at home like a loner 🙂 Sleeping in a bit in the morning when I did wake up I got my things together and shot through. I had a lot to do. Hair cut and clothes shopping. So home, shower change and off to Centro Galleria and Just Cuts for a hair cut. No strange result this time came out pretty well. Much better than the mess my hair was the night before. Hair cut done clothes shopping to do. Checked out most the same places I looked at Thursday night and still didn’t like anything more than I had already bought.

So I left Galleria and came home. Swap the washing over and have lunch quickly. Then off to Harbour Town. I had covered the ground level and found nothing and was starting to think I would just end up wearing what I did the night before. Visited one store and found a couple of items that were not great but I needed something so I grabbed them. Then almost walked past one place and didn’t even bother going in but I figured mind as well. This proved to be a good move. found a couple of items I liked but was really working. After a little help from the assistant I had found exactly what I was going to were Saturday night. Plus a couple of extras. Two more doors down I visited another store and found some more things I liked and my credit card was getting a nice work out so was time to leave but I had managed to pick-up a few items over the last few days. So all was good.

On the way home I went back over to Johns place because he had set up a photography studio in his garage and was playing around with some interesting ideas. Looked like a lot of fun but I didn’t have the time today so will have a go myself soon. Off home and it was time to get ready for Benno’s big party.

By the time I was ready and about to leave I was feeling good and looking forward to a big night. From my point of view it was a great night.

Arriving at Bennos only Zoe was there. I thought more were coming around earlier. Benno cracked it that I had brought beer but I wasn’t going to drink frosty cocktails all night. Soon after I arrived Brett and Michelle arrived who I met at the same party last year. As the night went on and a few more people started to show we heard the sound of GOLDRUSH getting revved up. I’m more surprised it started. going out to the garage and the boot popped with the battery plugged into mains meant he was cheating again. That and Benno stinking the house out with fumes.

Party bus driver arrived and it was the same dude from last year so he knew what he was getting into. Benno was a little annoyed because some people had pulled out and weren’t coming so we tried to get a few others to come with us but by this time on a Saturday night was no chance really of getting more people but we tried.

So onto the party bus and to Freo we went. It was clear Erin and Zoe may have trouble getting in so Brett and I moved up the line and went into the pub waiting for the others. Had a couple drinks and looked around and couldn’t find anyone. So we called and no ones phones were answering. After about 15 minutes we found them up the road at some food joint. Called the Bus driver to come get us and we would head into Northbridge and go to the second stop. Rocket Room. Bennos fav stop of the last few months. How ever same as Fremantle the girls were having issues because they were still a little effected by the cocktails. Brett and I were little bored at this point and so we left and found our own fun for a while.

When we came back they had been kicked out of the Rocket Room. After maybe an hour the bouncer decided to let Erin back in but a couple of choice words and yeah kicked out again. Benno had given up now and for him wasn’t the party he was expecting but Brett and I still had a good night of it.

Woke again today and no hang over. Benno was already up trying to clean the house. I think it was more a mess last year. Now it is fathers day and off to lunch at sizzler this afternoon. So the weekend continues.